How to Cook Roast Chicken 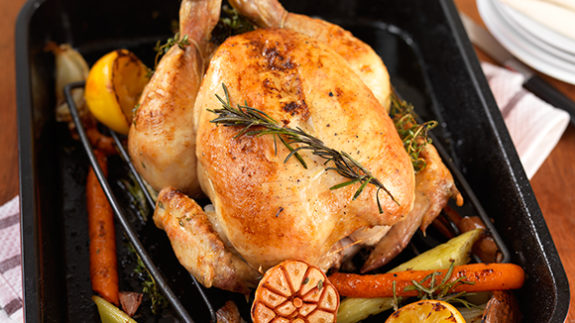 Roast chicken is one of the healthiest and lightest roast dinners. Chicken has a lower total fat content than red meats, with the larger part of the fat being monounsaturated. It is also a great alternative for the summer months when you can serve it cold as part of a roast dinner, salad or main meal.

A perfect chicken needs to be roasted carefully to make sure it’s cooked all the way through, whilst at the same time, moist on the inside and covered by crisp golden skin.

Buying the chicken
The best chickens are free range. Even though it’s more expensive, corn-fed and organic chickens have a considerably better flavour and texture than chickens that have been kept in confined conditions. When deciding how much chicken to buy, as a guideline a 1.4kg chicken should feed 4 people well and still allow for leftovers.

Before cooking
If you’re storing the chicken before cooking you should keep it wrapped in foil (not plastic) in a deep roasting tray in the middle of the fridge on a lower shelf. This will ensure that no juices from the chicken leak to avoid cross contamination. Before cooking, the chicken needs to be brought up to room temperature. Remove the chicken from the fridge at least half an hour before roasting and leave it covered in a cool place. The oven should always be properly preheated before putting the chicken in.

For a golden brown, crispy skin, rub the breast and legs of the chicken with some softened Stork Margarine.

When stuffing, begin at the neck end where you’ll find a flap of loose skin. Loosen this away from the breast and pack about two thirds of the stuffing inside. Tuck the neck flap under the bird’s back and secure it with a cocktail stick.

Vegetables and garlic can be placed around the chicken on a large roasting tray. Drizzle the chicken with olive oil and a little Robertsons Ground Black Pepper. Using a sharp knife, carefully prick a lemon all over and put the lemon inside the cavity of the chicken (with the remaining stuffing). This will help keep the bird moist as it cooks. You can also microwave the lemon for 40 seconds before putting it inside the chicken, as this will start to release its flavour. 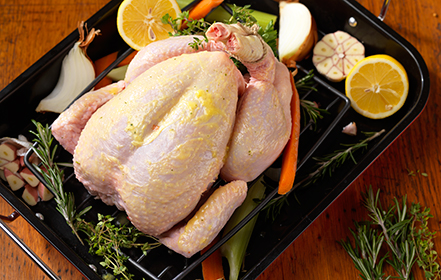 Cooking the chicken
As a rule, the roasting formula is 20 minutes per 450g plus an extra 20 minutes, which means a typical 1.4 kg chicken will be perfectly roasted after 1 hour and 20 minutes at 200°C.

Pierce a meat thermometer into the thickest part of the leg to ensure that it’s cooked through – optimal cooking temperature should be 75°C. If you don’t have a thermometer, then use a skewer to pierce between the leg and the body of the chicken. When properly cooked, the juices will run clear and not pink.

Baste the chicken halfway through the cooking process. If the vegetables look dry you should add a splash of water to the tray to prevent them from burning. When basting, be sure to take the chicken out of the oven rather than just opening the door. It will take a long time for the oven to regenerate the heat, which in turn will make the cooking time longer and harder to estimate.

Once the chicken is cooked it’s vital to let it rest before serving. Remove it from the roasting tin and place onto a serving plate. Cover loosely with foil and leave for at least 15 minutes. Serve the chicken with gravy made out of the pan juices and the giblet stock if used. For perfect results try using our Knorr Roast Chicken Gravy. Just mix with water and pour into the roasting pan, mix in some cooked onions and some of the water drained from your cooked vegetables then add some of the meat juices for maximum flavour.

Carving
The wings and any string from the chicken should be removed. Cut down between the leg and the breast. Once you’ve cut through the joint you can pull the leg off. Repeat the procedure on the other side.

Divide each leg in two by cutting between the thigh and the drumstick. There should now be space to carve the rest of the chicken. Cutting along the breastbone, carve one side off, then the other. Small bits can be removed using your fingers. Turn the chicken over to reach all the tasty and juicy bits from underneath.

If you want some flavour inspiration, look no further than our Roast Chicken with Bacon, Herb and Nut Stuffing Recipe. The combination of sweet butternut, salty bacon and juicy chicken with crispy skin is the ultimate fusion of flavours.

Stuff the chicken with bacon, onion, walnuts, breadcrumbs and egg, before placing into a roasting bag with potatoes, carrots and butternut. If you want an extra crispy skin, remember to open the bag 15 minutes before the end of cooking.