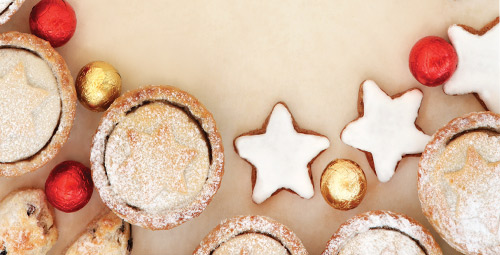 In a large pan, dissolve the sugar in the ruby port over a gentle heat. Add the apples and stir.

Add the cinnamon, ginger and cloves, currants, raisins and the zest and juice of the orange.

Bring to a gentle simmer and cook for 15 minutes. Remove from the heat and cool.

Add the brandy, almond essence, vanilla essence and honey and stir well. Spoon the mincemeat into sterilised jars and, once cool, store in the fridge for up to two weeks.

Mince pies: Measure the flour into a shallow bowl or dish and, with a teaspoon.

Add small cubes of vegetable shortening into the bowl, add the butter, diced small, shake to cover it, then put in the freezer for 20 minutes.

After the 20 minutes, empty the flour, salt and fat into the bowl of your food processor and blitz until you’ve it appears like breadcrumbs.

Add some iced water, 100ml at a time to form it into a smooth and soft dough.

Turn the mixture out of the processor or mixing bowl onto a pastry board or work surface and, using your hands, combine to a dough. Then form into 3 discs. Wrap each disc in clingfilm and put in the fridge for 20 minutes.

Roll out the discs, one at a time, as thinly as you can, About 2mm thick.

Cut out circles a little wider than the indentations in your tart tins using a fluted scone cutter. Press these circles gently into the moulds and place one teaspoon of mincemeat. Then cut out your stars with a small star cutter – re - rolling the pastry as necessary – and place the tops lightly on the mincemeat. Continue till all pastry is used.

Put in the oven and bake for 10–15 minutes until lightly golden brown.

Remove from the oven, prising out the little pies straight away and letting the empty tin cool down before you star t putting in the pastry for the next batch.

Garnish by dusting with icing sugar once completely cool.